Everyone’s running around with their hair on fire. If it isn’t one thing, it’s another. In a context relevant to his time, G. K. Chesterton wrote:

A silent anarchy is eating out our society. I must pause upon the expression; because the true nature of anarchy is mostly misapprehended. It is not in the least necessary that anarchy should be violent; nor is it necessary that it should come from below. A government [and press] may grow anarchic as much as a people…

Anarchy is that condition of mind or methods in which you cannot stop yourself. It is the loss of that self-control which can return to the normal. It is not anarchy because men are permitted to begin uproar, extravagance, experiment, peril. It is anarchy when people cannot end these things…

Though Chesterton wrote solely about the State, we take the liberty to reflect our current situation by adding to his text: the Press. Both, in our day, are anarchic, if only at their extremes:

…The State [and the Press have] suddenly and quietly gone mad. [They’re] talking nonsense; and [they] can’t stop…The modern world is insane, not so much because it admits the abnormal as because it cannot recover the normal…

Now the name of all this is Anarchy. It not only does not know what it wants, but it does not even know what it hates…These people have not the decision and detachment of the doctrinal ages. They…do a monstrous action and still [cannot] see it is monstrous. Wherever they make a stride they make a rut. They cannot stop their own thoughts, though their thoughts are pouring into the pit…

After giving several examples of extremes from which his society could not recover, he says:

The vital point to which to return is this. That it is not necessarily, nor even specially, an anarchy in the populace. It is an anarchy in the organ of government [and the press]. It is the magistrates [and journalist/commentators]—voices of the governing class—who cannot distinguish between cruelty and carelessness…

In our time, we have ravings about Russian involvement in our elections, but these people don’t consider their implied provocations. We must have immediate “pay fors” (which will happen anyway via other actions) for the three phased American Health Care Act out of a principle of austerity when millions of working and middle class voters will suffer health insurance loss if a replacement for the Affordable Care Act doesn’t pass.

To loosely quote Chesterton, the anarchic voices of the governing class and press cannot distinguish between cruelty and carelessness. All the examples cited, and these are only the most prominent ones today, seem driven by blind adherence to ideology, and sometimes, no ideology.

Someday, a Man, who is King of Kings, will address each one of us:

…Then the King will say to those [i.e., sheep] on his right, ‘Come, you who are blessed by my Father, inherit the kingdom prepared for you from the foundation of the world. For I was hungry and you gave me food, I was thirsty and you gave me drink, I was a stranger and you welcomed me, I was naked and you clothed me, I was sick and you visited me, I was in prison and you came to me.’

Then the righteous will answer him, saying, ‘Lord, when did we see you hungry and feed you, or thirsty and give you drink? …And the King will answer them, ‘Truly, I say to you, as you did it to one of the least of these my brothers, you did it to me.’

Perhaps your hands are clean of this anarchy, perhaps not. This existence we’ve been given is not a game. Consider your life. Consider yourself forewarned.

A Digital Carol – A Tale for Our Generation, By Adolphus Writer, Exclusively on Amazon as a Kindle Edition, a Mandated Memoranda Publishing, LLC release.

SYRACUSE, N.Y., Dec. 20, 2014 /PR Company TBD/ — A Digital Carol – A Tale for Our Generation is the old Dickens’s favorite—A Christmas Carol—reimagined. We now face a monstrous egotist who questions the very premise of his existence and ours. 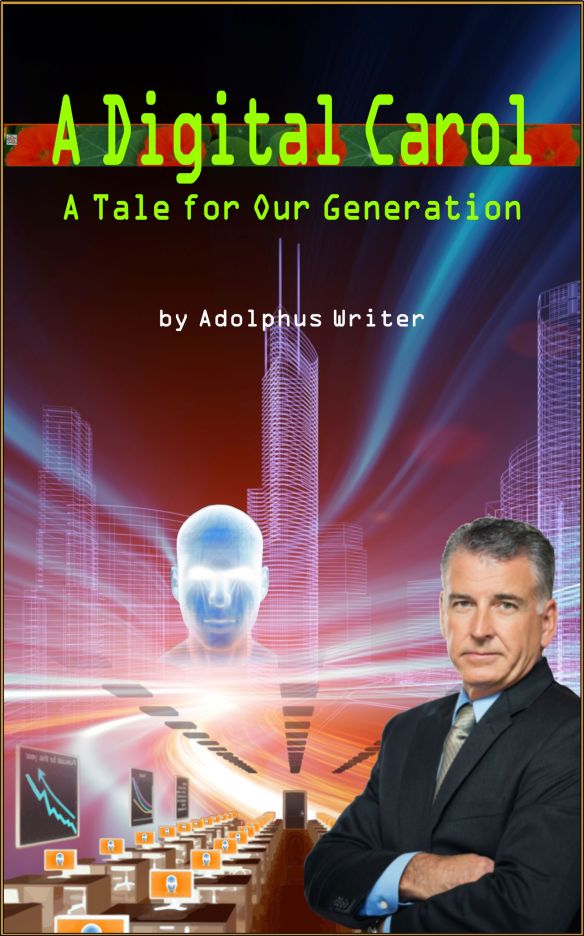 A Digital Carol – A Tale for Our Generation, by Adolphus Writer, 2014 Copyright, All Rights Reserved

We no longer believe in ghosts, do we? I thought not. But we invest our time and attention in the promise of virtual reality for entertainment and, as some might wish it, our evolutionary destiny. Of course, this is only the latest manifestation of our desire to create our own heaven, on our own terms, here on earth.

A Digital Carol is Dickens’s A Christmas Carol retold with new forms and modern perspectives. No longer do we read a tale of a mean miser who, through sorrowful experiences, becomes kindly. We now face a monstrous egotist who teeters between damnation and redemption.

This speculative fiction story’s goal is not to inspire a more joyous holiday or a more generous spirit, but to question the very premise of our existence. Are we too far into the dark night of the soul for anything but drastic measures?

“No one anticipated the unfortunate events that have taken place, sir. They would rather die than subject their families to these horrors.”—Solicitor for community charity

“Perhaps it’s best that they do die. It reduces the surplus population. We have no need of them all anymore. Not one of them. Worldwide.”—Eli Benjamin Ezer (aka E. Ben. Ezer)

“Writer’s (Tragic Wonders, 2013…) novella reimagines Charles Dickens’ A Christmas Carol as a cautionary sci-fi tale…Writer’s interpretation is an intriguing retelling, as it does much more than merely change the classic tale’s setting and style.” —Kirkus Reviews

Adolphus Writer holds a doctorate in theoretical physics. After he graduated, he took a job at a large US defense firm applying his creative and analytical skills to pressing problems. He married Ninja (NEEN–yuh) S. Writer after she completed her service with the German Federal Defense forces.

During the economic downturn spanning the first and second decades of the twenty–first century, his job was eliminated and he was terminated. In early 2012, Adolphus established Mandated Memoranda Publishing, LLC as a way to support the lifestyle to which he and his family had become accustomed. He says they like to eat on a daily basis and stay debt–free.

Our second Kindle Edition is Tragic Wonders – Stories, Poems, and Essays to Ponder which presents faith in Christ as a plausible alternative through brief narratives of realism, thriller, and science fiction. It was published on Amazon in December 2013.

Our upcoming fourth Kindle edition, Who Shall Be God, is a fictional account of the struggles between two families, the Stadists and the Libertas, who live in an east coast US city, north and south of the 38th parallel, respectively. It will be published on Amazon in late 2015 or early 2016.

We plan to release a fifth Kindle edition in late 2016 or early 2017. The working title for this book is China Dream. The book’s still in process, as is the dream itself. However, could the dream tragically turn into a nightmare instead?

A Digital Carol – A Tale for Our Generation

Connect with us online

On Amazon (Inside the Book available)