A Digital Carol – A Tale for Our Generation, By Adolphus Writer, Exclusively on Amazon as a Kindle Edition, a Mandated Memoranda Publishing, LLC release.

SYRACUSE, N.Y., Dec. 20, 2014 /PR Company TBD/ — A Digital Carol – A Tale for Our Generation is the old Dickens’s favorite—A Christmas Carol—reimagined. We now face a monstrous egotist who questions the very premise of his existence and ours.

A Digital Carol – A Tale for Our Generation, by Adolphus Writer, 2014 Copyright, All Rights Reserved

We no longer believe in ghosts, do we? I thought not. But we invest our time and attention in the promise of virtual reality for entertainment and, as some might wish it, our evolutionary destiny. Of course, this is only the latest manifestation of our desire to create our own heaven, on our own terms, here on earth.

A Digital Carol is Dickens’s A Christmas Carol retold with new forms and modern perspectives. No longer do we read a tale of a mean miser who, through sorrowful experiences, becomes kindly. We now face a monstrous egotist who teeters between damnation and redemption.

This speculative fiction story’s goal is not to inspire a more joyous holiday or a more generous spirit, but to question the very premise of our existence. Are we too far into the dark night of the soul for anything but drastic measures?

“No one anticipated the unfortunate events that have taken place, sir. They would rather die than subject their families to these horrors.”—Solicitor for community charity

“Perhaps it’s best that they do die. It reduces the surplus population. We have no need of them all anymore. Not one of them. Worldwide.”—Eli Benjamin Ezer (aka E. Ben. Ezer)

“Writer’s (Tragic Wonders, 2013…) novella reimagines Charles Dickens’ A Christmas Carol as a cautionary sci-fi tale…Writer’s interpretation is an intriguing retelling, as it does much more than merely change the classic tale’s setting and style.” —Kirkus Reviews

Adolphus Writer holds a doctorate in theoretical physics. After he graduated, he took a job at a large US defense firm applying his creative and analytical skills to pressing problems. He married Ninja (NEEN–yuh) S. Writer after she completed her service with the German Federal Defense forces.

During the economic downturn spanning the first and second decades of the twenty–first century, his job was eliminated and he was terminated. In early 2012, Adolphus established Mandated Memoranda Publishing, LLC as a way to support the lifestyle to which he and his family had become accustomed. He says they like to eat on a daily basis and stay debt–free.

Our second Kindle Edition is Tragic Wonders – Stories, Poems, and Essays to Ponder which presents faith in Christ as a plausible alternative through brief narratives of realism, thriller, and science fiction. It was published on Amazon in December 2013.

Our upcoming fourth Kindle edition, Who Shall Be God, is a fictional account of the struggles between two families, the Stadists and the Libertas, who live in an east coast US city, north and south of the 38th parallel, respectively. It will be published on Amazon in late 2015 or early 2016.

We plan to release a fifth Kindle edition in late 2016 or early 2017. The working title for this book is China Dream. The book’s still in process, as is the dream itself. However, could the dream tragically turn into a nightmare instead?

A Digital Carol – A Tale for Our Generation

Connect with us online

On Amazon (Inside the Book available)

Mandated Memoranda Publishing, LLC received, as part of our press release package, 105 seconds of exposure for this ad on the Thomson Reuters Sign at 43rd Street and 7th Avenue in Times Square. 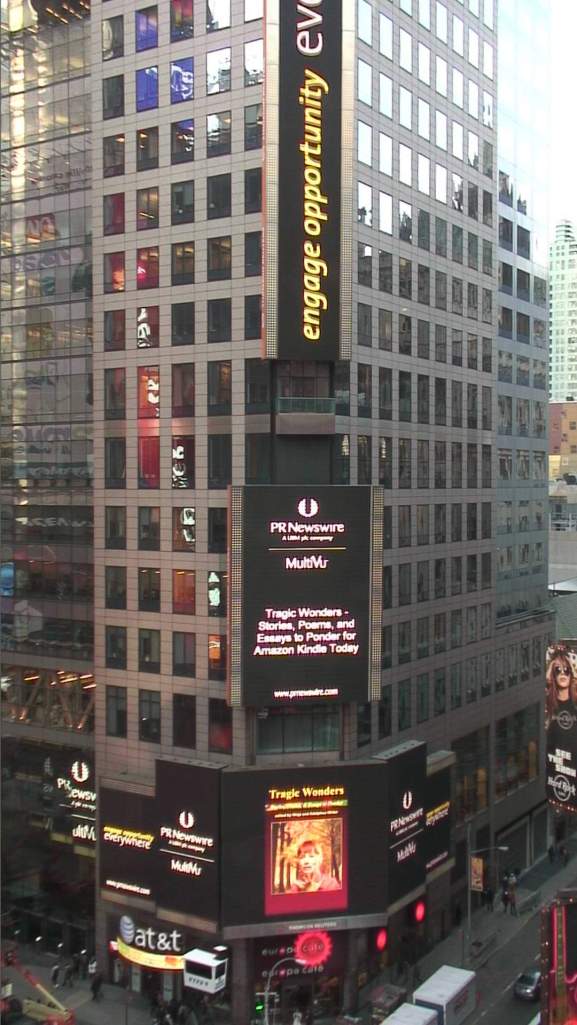 
We will do this for our next release; but we’ll add PR Newswire’s Twitter feed service. 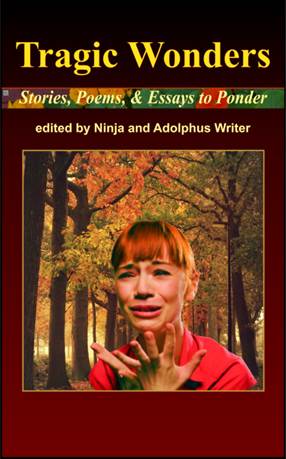 SYRACUSE, N.Y., Dec. 30, 2013 /PRNewswire-iReach/ — We all love to be entertained. But, what if that entertainment has other ideas? We asked our pseudonymous authors to write stories, poems, and essays of tragedy and wonder that delve into our souls’ deepest fears and needs.

In the short stories, you’ll meet a serial killer, alien snails, a petulant eleven–year–old, a beloved astronaut, a laid–off worker, and many others. Two poems provide a transition from fiction to opinion. The essays castigate, decry, praise, and skewer our personal, local, national, world, and cosmic conditions.

These writings are meant to engage readers in a reality that we all deny daily, whether we profess faith in Christ, are ambivalent, or are hostilely opposed to religion.

What if this world we live in is set up as a diabolical trap meant to prevent us from seeing that which is truly necessary? The anthology focuses on themes, situations, and emotions that are tragic, full of wonder, or, combined in some way, both.

We hope you’ll suspend your disbelief and consider the possibility that there is a way out of the trap in which we find ourselves. And that way doesn’t involve choosing between two different color pills.

“Maybe there’s a message in what great scholars once called futility or vanity? Perhaps there’s only one thing truly necessary.”—Karen Monteverde

This isn’t an easy read, but it is a rewarding one, as the stories are crafted with great care. All in all, if you are the kind of reader who likes to have their own assumptions on how reality truly exists questioned by the written word, then this is sure to be an enjoyable book for you. –Red City Review, November 23, 2013

Ninja (NEEN–yuh) S. Writer was born in Wolfsburg, West Germany. She majored in political science with a minor in mechanical engineering and volunteered for the Bundeswehr in 1994 when she learned a woman had attained the rank of general. She and Adolphus met while he was traveling in Germany. They married when she moved to the United States after completing her military service.

Adolphus Writer holds a doctorate in theoretical physics. After he graduated, he travelled to Europe, the Middle East, and Far East. Upon his return, he took a job at a large US defense firm applying his creative and analytical skills to pressing problems. He and Ninja corresponded extensively prior to their engagement.

In early 2012, Adolphus established Mandated Memoranda Publishing, LLC as a way to support the lifestyle to which he and his family had become accustomed. He says they like to eat on a daily basis and stay debt–free.

We plan to release a third Kindle edition, Who Shall Be God, a fictional account of the struggles between two families, the Stadists and the Libertas, who live in an east coast US city, north and south of the 38th parallel, respectively. Expect it on Amazon’s shelves in 2014 by the fall.

Book four, A Digital Carol, is a reimagining of the old Dickens’ favorite for a future generation. We are targeting it for Christmas, 2014. The working title for book five is China Dream. It’s still in process, as is the dream itself.

Edited by Ninja and Adolphus Writer

Find this article at:
http://www.prnewswire.com/news-releases/mandated-memoranda-publishing-announces-second-book-237970761.html

I can definitely assert that using ‘free days’ in the KDP Select program to boost book sales or visibility doesn’t work after the debut offering. I’ve tried using free days prior to the July 4th and Labor Day holidays only to realize a decrease in sales rank when the sale days were over.

I have 150 free copies out there all over the world and I know three of my four book reviewers (I have a good guess on the fourth). Each of them, likely, paid full freight.

I’ve tried other things to boost sales, too. I’ve put out a press release. Don’t be fooled by so-called ‘impressions’; only sales count. I did an author interview. It was very nicely presented but the site draws a limited audience. I have a Goodreads page. This site rejected me as an author for some reason.

I contacted Amazon Vine and Top reviewers in my book’s genre (spying & intrigue). Of the eight I contacted, one put me on his to read pile. He has a policy of not slamming books he doesn’t like; I greatly appreciate that attitude.

However, whining gets you nowhere.

I’ve got a second book in the works and I’m trying even harder than at first. Better writing. Better editing. Better marketing. Pricing based on page count. I’m sticking with KDP Select when it makes sense (70% royalty and the Lending Library program). And I’ll try to release a third book this year.

I’m going to have Red City review the first book, Tiānmìng – Mandate of Heaven, to find out what they think about it. We’ll have to see. There’ll be no welfare payments for this author.