Last week, we discussed story writing in a review of the book: Writing for Story: Craft Secrets of Dramatic Nonfiction by Jon Franklin. There, we covered the topic of narrative transition. One transition technique is stream of consciousness that joins two disparate ideas that have no clear logical connection by using an emotional one instead. What came to mind was Isaiah’s pronouncement of the Lord’s grace and mercy:

“Come now, let us reason together, says the Lord:

they shall be as white as snow;

How a declaration of Israel’s defection from obeying the Lord and His unmerited offer to wipe away those sins is connected by logical reasoning escapes me. Clearly, it is meant to reach the heart. Let’s see what Calvin offers on this verse:

…The charges which he makes against them [i.e., disobedient Israel] are not brought forward or maintained without strong necessity. For hypocrites are [inclined] to find fault with God, as if he were too severe, and could not be at all appeased.

They go still farther, and discover this excuse for their obstinacy, that it is in vain for them to attempt to return to a state of favor with God. If every other expedient fail, still they fly to this, that it is not proper to make such rigid demands on them, and that even the very best of men have something that needs to be forgiven…

Hence we obtain a declaration in the highest degree consolatory, that God does not contend with us as if he wished to pursue our offenses to the utmost. For if we sincerely turn to him, he will immediately return to favor with us, and will blot out all remembrance of our sins, and will not demand an account of them.

For he is not like men who, even for a slight and inconsiderable offense, often refuse to be reconciled. Nay, so far is he from giving us reason to complain of his excessive severity, that he is ready to cleanse us, and to make us as white as snow.

Amazingly, we, in this Post-Christian nation, are offered the same choice:

But what does it say? “The word is near you, in your mouth and in your heart” (that is, the word of faith that we proclaim); because, if you confess with your mouth that Jesus is Lord and believe in your heart that God raised him from the dead, you will be saved. For with the heart one believes and is justified, and with the mouth one confesses and is saved. Romans 10:8-10 (ESV)

I urge you, listen to your heart and receive His gracious gift of mercy.

Much has been said recently about the reestablishment of Israel in the Middle East. Even Kim Riddlebarger’s A Case for Amillennialism, which we mentioned a few weeks ago, touches on the issue of national Israel. Some of what’s been said is divisive and some is not.

So let’s step back from the contemporary rhetoric and see what the Bible says. The Apostle Paul discussed Israel in his letter to the church in Rome. He described that nation’s relationship to God now that the gospel had been revealed. Paul made the following statement:

And in this way all Israel will be saved, as it is written,

“The Deliverer will come from Zion,

He will banish ungodliness from Jacob”;

What did he mean by ‘in this way?’ It seems that a lot of controversy surrounds this clause.

The exegete John Calvin said of the verse:

Many understand this of the Jewish people, as though Paul had said, that religion would again be restored among them as before [e.g., the sacrificial system].

But I extend the word Israel to all the people of God, according to this meaning:

“When the Gentiles shall come in, the Jews also shall return from their defection to the obedience of faith; and thus shall be completed the salvation of the whole Israel of God, which must be gathered from both; and yet in such a way that the Jews shall obtain the first place, being as it were the first-born in God’s family.”

Calvin didn’t make this assertion and others because of personal preference or animus, but based on the context of Paul’s statements in the chapter. Paul went on to say:

As regards the gospel, they [i.e., Israel] are enemies for your [i.e., the hearers of his letter] sake. But as regards election, they are beloved for the sake of their forefathers. For the gifts and the calling of God are irrevocable.

For just as you were at one time disobedient to God but now have received mercy because of their disobedience, so they too have now been disobedient in order that by the mercy shown to you they also may now receive mercy. For God has consigned all to disobedience, that he may have mercy on all. Romans 11:28-32 (ESV)

To this, Calvin commented:

[Paul] shows that the worst thing in the Jews ought not to subject them to the contempt of the Gentiles. Their chief crime was unbelief: but Paul teaches us, that they were thus blinded for a time by God’s providence, that a way to the gospel might be made for the Gentiles;

Paul then intends here to teach two things — that there is nothing in any man why he should be preferred to others, apart from the mere favor of God; and that God in the dispensation of his grace, is under no restraint that he should not grant it to whom he pleases.

There is an emphasis in the word mercy; for it intimates that God is bound to none, and that he therefore saves all freely, for they are all equally lost.

…Paul simply means that both Jews and Gentiles do not otherwise obtain salvation than through the mercy of God, and thus he leaves to none any reason for complaint. It is indeed true that this mercy is without any difference offered to all, but everyone must seek it by faith.

And thus ‘in this way’: All Israel Shall Be Saved. 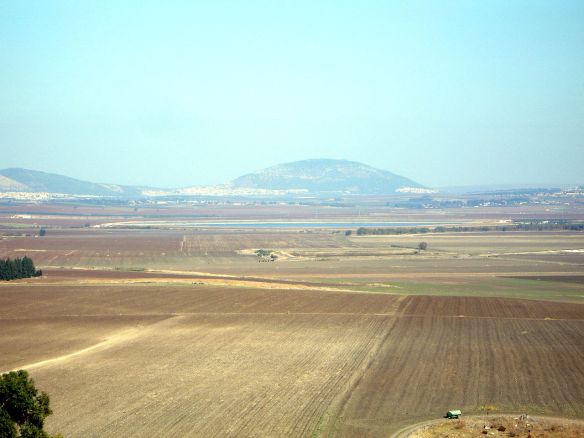 The view from Megiddo, northeast across the Jezreel Valley in Israel to Mount Tabor, 9 November 2005, by Joe Freeman, Creative Commons Attribution-Share Alike 2.5 Generic