Make no friendship with a man given to anger,

nor go with a wrathful man,

lest you learn his ways

and entangle yourself in a snare.

Our usual source for commentary, John Calvin, did not comment on the book of Proverbs. We therefore go to Matthew Henry. Wikipedia claims he is best known for this quote from his commentary on Genesis, Chapter 2:

The woman was made of a rib out of the side of Adam; not made out of his head to rule over him, nor out of his feet to be trampled upon by him, but out of his side to be equal with him, under his arm to be protected, and near his heart to be beloved.

To the verses in Proverbs, Henry says:

Make no friendship …It is the law of friendship that we accommodate ourselves to our friends and be ready to serve them, and therefore we ought to be wise and wary in the choice of a friend, that we come not under the sacred tie to any one whom it would be our folly to accommodate ourselves to. Though we must be civil to all, yet we must be careful whom we lay in our bosoms and contract a familiarity with.

Clearly, Henry holds friendship is high regard. This is no mere acquaintance nor a casual buddy he speaks about. This is someone we’d make a commitment to as a confidant with whom we could be at ease. Henry goes on to describe one, among many, he says, who we should avoid:

…A man who is easily provoked, touchy, and apt to resent affronts, who, when he is in a passion, cares not what he says or does, but grows outrageous, such a one is not fit to be made a friend or companion, for he will be [frequently] angry with us and that will be our trouble, and he will expect that we should, like him, be angry with others, and that will be our sin.

Then, Henry tells us why we should avoid such would-be compatriots:

Our corrupt hearts have so much tinder in them that it is dangerous conversing with those that throw about the sparks of their passion. We shall thereby get a snare to our souls, for a disposition to anger is a great snare to any man, and an occasion of much sin.

He does not say, “Lest thou have ill language given thee or get a broken head,” but, which is must worse, “Lest thou imitate him, to humor him, and so contract an ill habit.”

Don’t get ensnared or shorn by those with whom you are familiar. Take Proverbs 22:24-25 to heart and act upon it. Remember, there is a friend who sticks closer than a brother. 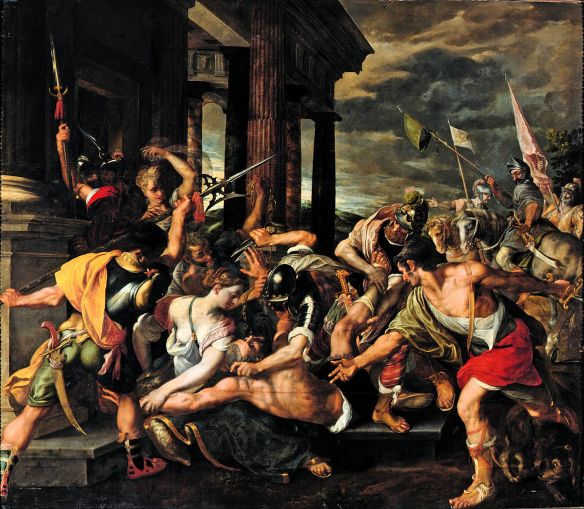 Delilah’s Betrayal and Samson’s Imprisonment by the Philistines, Circa 1580, Joos van Winghe (1544 – 1603), in the public domain in the United States