A while back, I was asked if I could write something light and fluffy; something buoyant and uplifted. So I got to thinking. I always wondered how clouds, those 500 ton shape shifting behemoths that patrol our skies, float in the air. Or do they hover? I guess I really don’t know clouds at all… 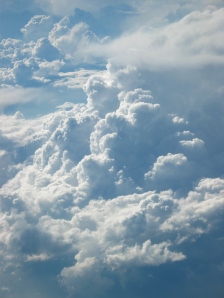 Clouds – taken from a plane flying over China by Axel Rouvin

That led me to remember the Joni Mitchell song off the album Clouds called “Both Sides, Now.” As recounted in Rolling Stone magazine, when Joni Mitchell read Saul Bellow‘s Henderson the Rain King, Henderson, like Mitchell, was looking at clouds from a plane. Her lyric: “I’ve looked at clouds from both sides now,” was a symbol of the ambiguities and mysteries of life.

In a 1967 radio interview, she related a quote from the book: “I dreamed down at the clouds, and thought that when I was a kid I had dreamed up at them, and having dreamed at the clouds from both sides as no other generation of men has done, one should be able to accept his death very easily.”

We disagree vehemently with Bellow’s sentiment. Death was never meant to be accepted so blithely. But I digress. There is more than enough on this blog to explain our position. That insight into her intended meaning proved to be a disappointment. I like the song otherwise. I guess you have to pay attention to the lyrics. Where were we? Light and fluffy…

Getting back to our premise for this entry, do clouds float or hover? By float, I mean like a rubber duck in a bath tub. By hover, I mean something like what a helicopter does (but possibly in reverse like an umbrella blowing away). Turns out it’s a little of both. Wikipedia has very detailed articles on water vapor and clouds that I hope to summarize below.

It turns out that water vapor is less dense than dry air. At the same temperature, water vapor floats in dry air like a rubber duck in water. The article on water vapor crunches the numbers. But it’s even better. Since both are gases, a volume of moisture laden air will rise or be buoyant if placed in a larger volume of dry air.

As the temperature rises, the proportion of water vapor in the air increases and its buoyancy will increase along with the added vapor. In air without particulates, water vapor density can reach 300% before condensation occurs under normal conditions (a principle used in cloud chambers).

The increase in buoyancy gives rise to strong, moisture rich, upward air currents when the air and sea temperatures reach 25 °C or above. This is the driving force behind tornadoes and hurricanes. In fact, under the right conditions, water vapor can lift a “steam balloon” with approximately 60% the lift of helium and twice that of hot air.

Clouds form when one or more sources of vertical lift causes air containing invisible water vapor to rise and cool to the temperature at which water vapor starts condensing. Atmospheric pressure decreases with altitude, so the rising air expands in a process that expends energy without heat loss to the surrounding air and causes the rising air to cool. If the air is cooled enough, the vapor condenses into a cloud.

Water vapor in saturated air is attracted to condensation nuclei such as salt particles, dust, or even bacteria that are small enough to be held aloft by air circulation alone. If condensation occurs below the freezing level, the average size of a newly formed droplet is around 0.02 mm (0.0008 in). Clouds that form just above the freezing level are composed of supercooled liquid droplets, while those that condense out at higher altitudes where the air is much colder generally form of ice crystals.

There are three main sources of vertical lift. The first is a combination of frontal and cyclonic lift. It occurs when stable or slightly unstable air, exposed to little or no surface heating, is forced aloft at weather fronts and around centers of low pressure. Cloud droplets form when the air is lifted beyond the condensation level where water vapor condenses on nuclei and droplets grow to a size of typically 0.025 mm (.001 in). In a cloud the droplets collide to form larger droplets. These larger droplets remain aloft as long as the atmospheric drag force of the air below them is larger than the gravitational force on them.

If the cloud droplets continue to grow past this size, they become too heavy to be held aloft and fall as rain. When this process takes place just above the freezing level, with additional lifting and growth in size, droplets can turn into freezing rain. At temperatures well below freezing, the vapor turns into ice crystals that average about 0.25 mm in length. With continuing lift, ice crystals combine with the vapor and each other until they are too heavy to be supported by the vertical air currents and fall out as snow.

The second source of vertical lifting, buoyant convection, is caused by daytime solar heating at surface level, or by relatively high absolute humidity. Air warmed in this way becomes increasingly unstable and it rises and cools until its temperature equals that of the surrounding air aloft. If air near the surface becomes extremely warm and unstable, it can result in rapidly rising clouds that cause severe weather. Strong convection updrafts enable droplets to grow to nearly .075 mm (.003 in) before precipitating as heavy rain from active thunderclouds. Occasionally, very warm unstable air is present around fronts and low-pressure centers. As with non-frontal convective lift, increasing instability promotes upward vertical cloud growth and raises the potential for severe weather.

A third source of lift is wind circulation forcing air over a physical barrier such as a mountain. This is called orographic lift. If the air is generally stable, nothing more than lenticular cap clouds will form. However, if the air becomes sufficiently moisture laden and unstable, orographic showers or thunderstorms may appear. 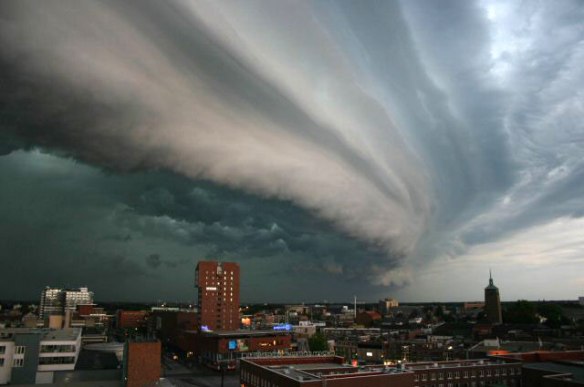 Additionally, there are three other mechanisms for lowering the air temperature to the point where water vapor condenses. All of these occur near surface level and do not require lifting of the air. Cooling by conduction, radiation, and evaporation can cause condensation at surface level resulting in the formation of fog.

Conduction cooling takes place when air from a relatively mild source area comes into contact with a colder surface, such as when mild marine air moves across a colder land area. Radiation cooling occurs due to the emission of infrared radiation, either by the air or by the surface underneath. This type of cooling commonly occurs at night when the sky is clear. Evaporative cooling happens when moisture is added to the air through evaporation, which forces the air temperature to cool to its wet-bulb temperature, or sometimes to the point of saturation.

So clouds float and hover. Who would have guessed? Aren’t they pretty? 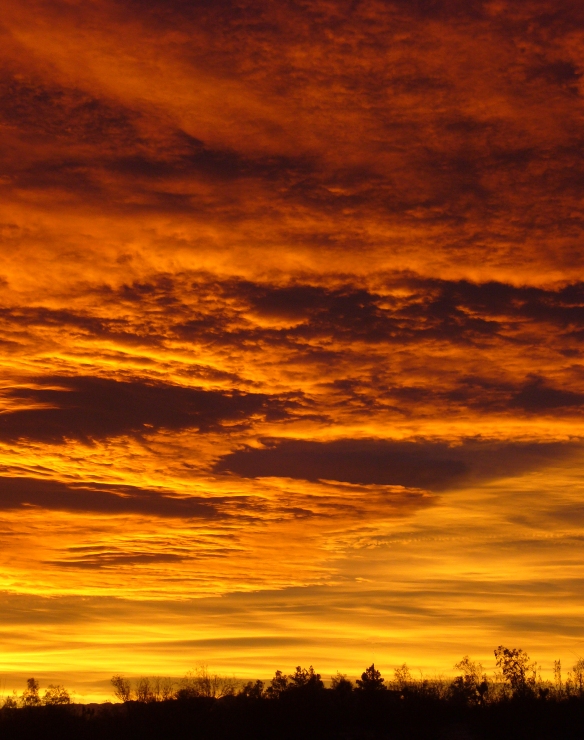