Two weeks ago, we discussed: “Where is the promise of His coming?” We covered the first few verses of the third chapter of the Apostle Peter’s second letter (2 Peter 3:4-7.) Today, we go on to 2 Peter 3:9-13 and consider the theme: “The Lord is not slow.”

The Lord is not slow to fulfill his promise as some count slowness, but is patient toward you, not wishing that any should perish, but that all should reach repentance.

But the day of the Lord will come like a thief, and then the heavens will pass away with a roar, and the heavenly bodies will be burned up and dissolved, and the earth and the works that are done on it will be exposed.

Since all these things are thus to be dissolved, what sort of people ought you to be in lives of holiness and godliness, waiting for and hastening the coming of the day of God, because of which the heavens will be set on fire and dissolved, and the heavenly bodies will melt as they burn!

But according to his promise we are waiting for new heavens and a new earth in which righteousness dwells.

The theologian John Calvin starts his exposition of this passage with a summary:

But the Lord is not slack, or, delays not. …[Peter says, as a check on us,] that the Lord defers his coming that he might invite all mankind to repentance. For our minds are always [immoderate], and a doubt often creeps in, why he does not come sooner…

Calvin then dissects what has become a contentious point for many concerning Calvinism. Dare we say that Calvin was not a hyper-Calvinist?

Not willing that any should perish. So wonderful is his love towards mankind, that he would have them all to be saved, and [he stands ready] to bestow salvation on the lost. But, [notice the order,] that God is ready to receive all to repentance, so that none may perish; for in these words the way and manner of obtaining salvation is [identified (i.e., repentance.)] Every one of us, therefore, who [desires] salvation, must…enter in by this way.

But, [one can ask], If God wishes none to perish, why is it that so many do perish? To this my answer is, that no mention is here made of the hidden purpose of God, according to which the reprobate are doomed to their own ruin, but only of his will as made known to us in the gospel. For God there stretches forth his hand without a difference to all, but lays hold only of those, to lead them to himself, whom he has chosen before the foundation of the world…

So, as Spurgeon would later say: “That God predestines, and that man is responsible, are two things that few can see. They are believed to be inconsistent and contradictory; but they are not.”

Next, Calvin explains the purpose in Peter’s reassurance of His coming:

But the day of the Lord will come. This has been added, that the faithful might be always watching, and not promise tomorrow to themselves. For we all labor under two very different evils — too much haste, and slothfulness. We are seized with impatience for the day of Christ already expected; [yet,] at the same time, we securely regard it as afar off…[From what cause] is it that flesh indulges itself except that there is no thought of the near coming of Christ?

Further, he shows that these verses are meant to exhort us to godly living:

What afterwards follows, respecting the burning of heaven and earth, requires no long explanation, if indeed we duly consider what is intended. For it was not [Peter’s] purpose to speak [sophisticatedly] of fire and storm, and other things, but only that he might introduce an exhortation, which he immediately adds, even that we ought to strive after newness of life…

Looking for and hasting unto, or, waiting for by hastening; …We must always take heed lest the security of the flesh should creep in; we ought, therefore, strenuously to labor in good works, and run quickly in the race of our calling…

Let us, therefore, not be unfaithful because of His delay but be ready for action like those waiting for a savior from heaven.

I’ve always found the second of these two verses baffling:

What does: “then the Son himself will also be subjected” mean? The commentator, John Calvin, says the following about these verses:

He hath put all things under his feet Some think that this quotation is taken from Psalm 8:6, and I have no objection to this, though there would be nothing out of place in reckoning this statement to be an inference that is drawn by Paul from the nature of Christ’s kingdom. Let us follow, however, the more generally received opinion. Paul shows from that Psalm, that God the Father has conferred upon Christ the power of all things, because it is said, “Thou hast put all things under his feet.”

Next is the part that I find confusing, to which, Calvin says:

All things put under him, except him who put all things under him. …It must be observed, that [Christ] has been appointed Lord and highest King, so as to be, as it were, the Father’s Vicegerent in the government of the world — not that he is employed and the Father unemployed (for how could that be, inasmuch as he is the wisdom and counsel of the Father, is of one essence with him, and is therefore himself God?)

But the reason why the Scripture testifies, that Christ now holds dominion over the heaven and the earth in the room of the Father is — that we may not think that there is any other governor, lord, protector, or judge of the dead and living, but may fix our contemplation on him alone.

We acknowledge, it is true, God as the ruler, but it is in the face of the man Christ. But Christ will then restore the kingdom which he has received, that we may cleave wholly to God. Nor will he in this way resign the kingdom, but will transfer it in a manner from his humanity to his glorious divinity, because a way of approach will then be opened up, from which our infirmity now keeps us back.

Thus then Christ will be subjected to the Father, because the vail being then removed, we shall openly behold God reigning in his majesty, and Christ’s humanity will then no longer be interposed to keep us back from a closer view of God.

Calvin’s description above brings to mind the description in the Book of the Revelation of the New Heavens and New Earth, the Holy City, and the River of Life. Carrying this thought further, Calvin says:

That God may be all in all …For the present, as the Devil resists God, as wicked men confound and disturb the order which he has established, and as endless occasions of offense present themselves to our view, it does not distinctly appear that God is all in all; but when Christ will have executed the judgment which has been committed to him by the Father, and will have cast down Satan and all the wicked, the glory of God will be conspicuous in their destruction.

The scriptures portray these events in the Defeat of Satan and Great White Throne Judgment. Calvin continues:

The same thing may be said also respecting powers that are sacred and lawful in their kind, for they in a manner hinder God’s being seen aright by us in himself. Then, on the other hand, God, holding the government of the heaven and the earth by himself, and without any [intervening agency], will in that respect be all, and will consequently at last be so, not only in all persons, but also in all creatures.

The Apostle Paul, in the Letter to the Romans, expressed it this way:

For the creation waits with eager longing for the revealing of the sons of God. For the creation was subjected to futility, not willingly, but because of him who subjected it, in hope that the creation itself will be set free from its bondage to corruption and obtain the freedom of the glory of the children of God. Romans 8:19-21 (ESV)

Others have also commented on these verses, such as Chrysostom and Matthew Henry, who says that, when sin is no more, Christ in His glory will no longer be mediator between God and man but will be with man as God. But the commentary I like best is:

None of the rulers of this age understood this, for if they had, they would not have crucified the Lord of glory. But, as it is written,

“What no eye has seen, nor ear heard,

nor the heart of man imagined,

what God has prepared for those who love him”— 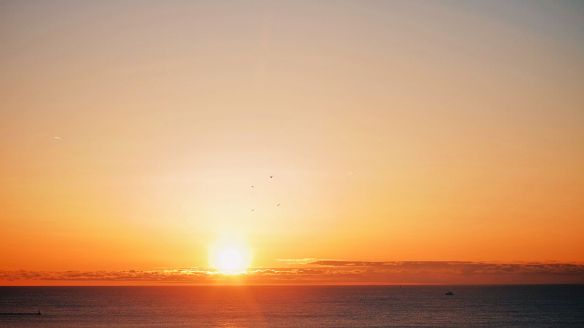