The story where Jesus cleanses ten lepers is a familiar one. It’s unusual that it comes right before one of Jesus’s declarations of the Kingdom. Or is it?

On the way to Jerusalem he was passing along between Samaria and Galilee. And as he entered a village, he was met by ten lepers, who stood at a distance and lifted up their voices, saying, “Jesus, Master, have mercy on us.” When he saw them he said to them, “Go and show yourselves to the priests.” And as they went they were cleansed.

Then one of them, when he saw that he was healed, turned back, praising God with a loud voice; and he fell on his face at Jesus’ feet, giving him thanks. Now he was a Samaritan. Then Jesus answered, “Were not ten cleansed? Where are the nine? Was no one found to return and give praise to God except this foreigner?” And he said to him, “Rise and go your way; your faith has made you well.”

John Calvin has some interesting comments about the passage:

Thy faith hath saved thee. The word save is restricted by some commentators to the cleanness of the flesh. But if this be the case, since Christ commends the lively faith of this Samaritan, it may be asked, how were the other nine saved? for all of them without exception obtained the same cure.

We must therefore arrive at the conclusion, that Christ has here pronounced a different estimate of the gift of God from that which is usually pronounced by ungodly men; namely, that it was a token or pledge of God’s fatherly love.

The nine lepers were cured; but as they wickedly efface the remembrance of the grace of God, the cure itself is debased and contaminated by their ingratitude, so that they do not derive from it the advantage which they ought. It is faith alone that sanctifies the gifts of God to us, so that they become pure, and, united to the lawful use of them, contribute to our salvation.

Lastly, by this word Christ has informed us in what manner we lawfully enjoy divine favors. Hence we infer that he included the eternal salvation of the soul along with the temporal gift. The Samaritan was saved by his faith How? Certainly not because he was cured of leprosy, (for this was likewise obtained by the rest,) but because he was admitted into the number of the children of God, and received from His hand a pledge of fatherly kindness.

We see the extent of God’s common grace through healings. But, without faith, those temporal miracles do not result in salvation.

From the nature of the kingdom itself he shows that they are altogether in the wrong, who look around here or there, in order to observe visible marks. “That restoration of the Church,” he tells us, “which God has promised, must be looked for within; for, by quickening his elect into a heavenly newness of life, he establishes his kingdom within them.”

And thus he indirectly reproves the stupidity of the Pharisees, because they aimed at nothing but what was earthly and fading. It must be observed, however, that Christ speaks only of the beginnings of the kingdom of God; for we now begin to be formed anew by the Spirit after the image of God, in order that our entire renovation, and that of the whole world, may afterwards follow in due time.

I urge you, turn back, submit yourself to Him, and give Him thanks. 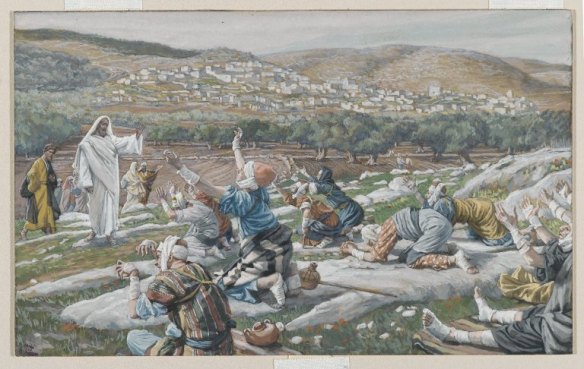