Last week I reported on “Christ’s Human Nature.” There, the fourth point of John Flavel’s sermon: “Of Christ’s wonderful Person,” on John 1:14, in his book: Fountain of Life Opened Up, caught my attention:

Fourthly, [Christ’s] human nature is so united with the divine, as that each nature still retains its own essential properties distinct… The divine and human are not confounded; but a line of distinction runs betwixt them still in this wonderful person…

If you have the time and patience, I urge you to read his entire sermon. He offers sound doctrine on Christ’s human nature.

Flavel’s point got me wondering. Was the distinction and union obvious in scripture, would it prove Flavel’s points, and did John Calvin have insight that might help us to understand Christ better? What jumped to mind was the Lord’s struggle-in-prayer in the garden before He was betrayed as recounted in the synoptic gospels of Matthew, Mark, and Luke:

And going a little farther he fell on his face and prayed, saying, “My Father, if it be possible, let this cup pass from me; nevertheless, not as I will, but as you will.” Matthew 26:39 English Standard Version (ESV)

Even though the wording is different in the three accounts, in each, He defers to His Father’s will rather than His own. Was this the quintessential example of the distinct natures united?

Calvin addresses many possible questions we (and others) might have when reading Christ’s entreaty of His Father. However, to achieve some semblance of brevity, we’ve assembled those answers that are most relevant to our questions:

My Father, if it be possible. …We must remember…that Christ [did not have] confused emotions, like those to which we are accustomed, to withdraw his mind from pure moderation; but, so far as the pure and innocent nature of man could admit, he was struck with fear and seized with anguish, so that, amidst the violent shocks of temptation, he vacillated—as it were—from one wish to another. This is the reason why, after having prayed to be freed from death, he immediately restrains himself, and, submitting to the authority of the Father, corrects and recalls that wish which had suddenly escaped him…

But yet not as I will, but as thou wilt. …What led him to pray to be delivered from [His own physical] death was the dread of a greater evil. When he saw the wrath of God exhibited to him, as he stood at the tribunal of God charged with the sins of the whole world, he unavoidably shrunk with horror from the deep abyss of death…When Christ was struck with horror at the divine curse, the feeling of the flesh affected him in such a manner, that faith still remained firm and unshaken. For such was the purity of his nature, that he felt, without being wounded by them, those temptations which pierce us with their stings.

…in Christ there was a remarkable example of adaptation between the two wills, the will of God and the will of man, so that they differed from each other without any conflict or opposition…for Christ, as he was God, willed nothing different from the Father; and therefore it follows, that his human soul had affections distinct from the secret purpose of God…Christ was under the necessity of holding his will captive, in order to subject it to the government of God, though it was properly regulated.

The lesson Calvin draws for us based on the various questions we’ve included and omitted is:

…In the present corruption of our nature it is impossible to find ardor of affections accompanied by moderation, such as existed in Christ; but we ought to give such honor to the Son of God, as not to judge of him by what we find in ourselves.

In this light, his application is:

…How carefully ought we to repress the violence of our feelings, which are always inconsiderate, and rash, and full of rebellion? …We owe to God such obedience as to endure patiently that our wishes should not be granted; For the modesty of faith consists in permitting God to appoint differently from what we desire. Above all, when we have no certain and special promise, we ought to abide by this rule, not to ask anything but on the condition that God shall fulfill what he has decreed; which cannot be done, unless we give up our wishes to his disposal.

In his sermon, Flavel gives an excellent explanation of the differences between Christ and ourselves. Calvin drives home the point with how, given His example, we should endure our inevitable trials of faith. May the Lord Jesus Christ grant us obedience in these trials.

On at least two recorded occasions, God has called out, “Where are you?” or words to that effect. The first call was in the garden of Eden at the beginning of creation:

But the Lord God called to the man and said to him, “Where are you?” And he said, “I heard the sound of you in the garden, and I was afraid, because I was naked, and I hid myself.” He said, “Who told you that you were naked? Have you eaten of the tree of which I commanded you not to eat?”

God created Man: Adam and Eve, gave them dominion over the earth, commanded them to obey one constraint, and placed them in the garden He created to tend it. Within a short time, by the will of God, their obedience to His one command was tested. They failed that test, and hid themselves because of their shame.

John Calvin comments on this crucial drama. First, he explains the nature of Adam’s and Eve’s fall:

Eve erred in not regulating the measure of her knowledge by the will of God…whereas the principal point of wisdom is a well-regulated sobriety in obedience to God.

…For the sake of complying with the wishes of his wife [and] being drawn by her into fatal ambition…[Adam] gave greater credit to the flatteries of the devil than to the sacred word of God.

God…manifest[s] himself to men…through the word, so…his majesty [is] maintained [and he is properly worshipped by us only] while we obey his word. Therefore, unbelief was the root of defection.

…They had been made in the likeness of God; but [they unlawfully aspired to] equality [with God by knowing good and evil].

As to the consequences of our ancestors’ fall, Calvin says:

…We are despoiled of the excellent gifts of the Holy Spirit, of the light of reason, of justice, and of rectitude, and are prone to every evil; that we are also lost and condemned, and subjected to death, is both our hereditary condition, and, at the same time, a just punishment which God, in the person of Adam, has indicted on the human race…From the time in which we were corrupted in Adam, we do not bear the punishment of another’s offense, but are guilty by our own fault.

Expounding on God’s confrontation of Adam and Eve in the garden, Genesis 3:8-11, Calvin says:

They had been already smitten by the voice of God, but they lay confounded under the trees…God now approaches nearer, and from the tangled thicket of trees draws him, however unwilling and resisting, forth into the midst…

Although this seems to be the confession of a dejected and humbled man, it will nevertheless soon appear that he was not yet properly subdued, nor led to repentance. He imputes his fear to the voice of God, and to his own nakedness…he fails to recognize the cause of shame in his sin; he, therefore, shows that he does not yet so feel his punishment, as to confess his fault.

…God [states] that Adam was admonished [prior to his disobedience]; and that he fell from no other cause than this, that he knowingly and voluntarily brought destruction upon himself.

Again, the atrocious nature of sin is marked in this transgression and rebellion; for, as nothing is more acceptable to God than obedience, so nothing is more intolerable than when men, having spurned his commandments, obey Satan and their own lust.

The second cry of “Where are you?” comes through other words from Christ on the Cross:

And about the ninth hour Jesus cried out with a loud voice, saying, “Eli, Eli, lema sabachthani?” that is, “My God, my God, why have you forsaken me?” Matthew 27:46 (ESV)

Calvin dissects this passage with help of old testament witnesses to Christ’s sufferings:

…Not only did he [i.e., Christ] offer his body as the price of our reconciliation with God, but in his soul also he endured the punishments due to us; and thus he became, as Isaiah speaks, a man of sorrows, (Is. 53:3.)

…When this temptation [i.e., being forsaken of God] was presented to Christ, as if, having God opposed to him, he were already devoted to destruction, he was seized with horror…but by the amazing power of the Spirit he achieved the victory.

In short, during this fearful torture his faith remained uninjured, so that, while he complained of being forsaken, he still relied on the aid of God as at hand.

Thus we see two diametrically opposite outcomes to similar events. God called to the first Adam, “Where are you?” The last Adam called to God “Why have you forsaken me?” The first Adam forsook his obedience to God’s word in exchange for his own self-exaltation. The last Adam overcame the temptation to reject God’s plan through faith in His Father’s promises. The Apostle Paul summarizes it nicely:

So, I must ask, where are you? 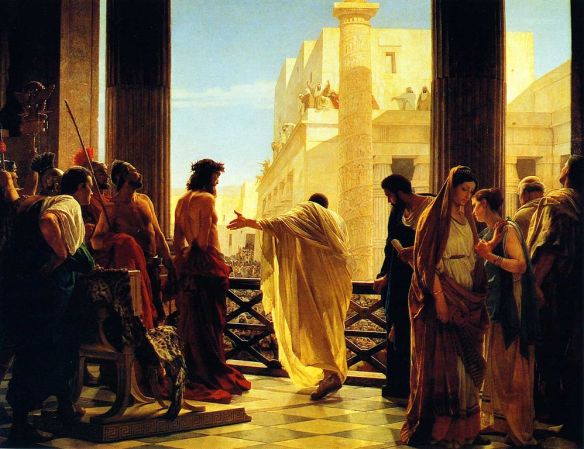