A new book just came out debunking the link between heart disease and saturated fats. Here’s a quote from the author’s Wall Street Journal Saturday essay:

The fact is, there has never been solid evidence for the idea that these fats cause disease. We only believe this to be the case because nutrition policy has been derailed over the past half-century by a mixture of personal ambition, bad science, politics and bias.

Isn’t that the problem, we jockey for money, power, and fame and look what happens: kale. Quoting from the essay again:

This shift [from animal fat to vegetable oils] seemed like a good idea at the time, but it brought many potential health problems in its wake. In those early clinical trials, people on diets high in vegetable oil were found to suffer higher rates not only of cancer but also of gallstones. And, strikingly, they were more likely to die from violent accidents and suicides.

Who knew that Butter, Meat and Cheese Belong in a Healthy Diet.

What about brute Neandertals? Certainly we got that right. Here’s a recent admission from Scientific American:

Ironically, the original La Chapelle-aux-Saints discovery in the early 20th century gave rise to the Neandertals’ unfortunate reputation as dumb brutes. Shortly after the find, French paleontologist Marcellin Boule reconstructed the skeleton to show a stooped, slouching individual with bent knees, a short neck and a low, sloping skull. Thus, the image of the oafish caveman was born. Scientists later determined that the skeleton was in fact that of an aged male who suffered from severe arthritis.

Quoting from the abstract of a PLOS ONE article titled: Neandertal Demise: An Archaeological Analysis of the Modern Human Superiority Complex:

The paper goes on to suggest interbreeding and assimilation may be responsible for the disappearance of specific Neandertal morphology from the fossil record.

Certainly there can’t be fountains of the deep as described in Genesis and made popular by the recent film Noah? Well, yeah.

All these discrepancies in our science point toward a specific worldview. This worldview encompasses what to think (i.e., modern man is the pinnacle of evolution) and how to think (i.e., power and money rule the prevailing culture, deviate from it at your peril). Holding this worldview ultimately results in downright fraudulence in the quest to dominate all that is thought and believed.

One such fraud recently perpetrated concerned delegitimizing a religion that originated in the Middle East. No one but the skeptical would take the attack seriously. Now–a–days, everyone expects scoffers to scoff, but how many others were hindered or shaken from a true understanding?

A recent WSJ article, How the ‘Jesus’ Wife’ Hoax Fell Apart, comments on the fraud and its resolution.

“Two factors immediately indicated that this was a forgery,” Mr. Askeland tells me. “First, the fragment shared the same line breaks as the 1924 publication. Second, the fragment contained a peculiar dialect of Coptic called Lycopolitan, which fell out of use during or before the sixth century.” Ms. King [the original researcher involved in the September 2012 announcement] had done two radiometric tests, he noted, and “concluded that the papyrus plants used for this fragment had been harvested in the seventh to ninth centuries.” In other words, the fragment that came from the same material as the “Jesus’ wife” fragment was written in a dialect that didn’t exist when the papyrus it appears on was made.

It is perhaps understandable that Ms. King would have been taken in when an anonymous owner presented her with some papyrus fragments for research. What is harder to understand was the rush by the media and others to embrace the idea that Jesus had a wife and that Christian beliefs have been mistaken for centuries. 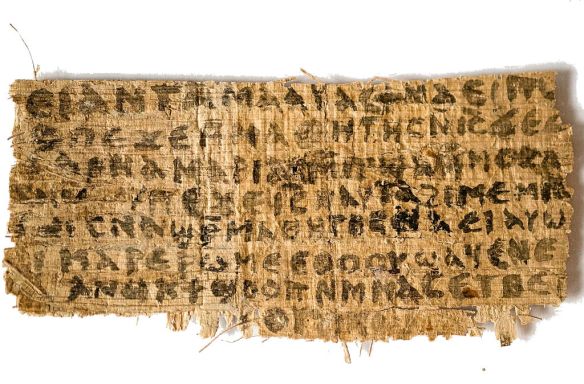 I have to ask. Why go to so much trouble? Heart disease, kindred Neandertals, deep fountains, and forged papyri, oh my. If the interpretation of facts and worldviews supported by them are unimportant, then leave it alone and walk away. But they are important. It’s life or death and everyone knows it.

Consider the following. What would happen if we would de-politicize and de-conflict science? Maybe funding wouldn’t be so hard to come by. Maybe folks wouldn’t be so pressured to tow the party line (at any cost). Maybe we’d see some viewpoints, other than our own, are not as crazy as they sound and are just as scientific. Maybe they’d be even more scientific. Just maybe.