In a previous post, we explored why we should not despise those in the church (Romans 14: 10-13.) Here, we try to understand the Lord Jesus’s command:

“See that you do not despise one of these little ones. For I tell you that in heaven their angels always see the face of my Father who is in heaven.” Matthew 18:10 English Standard Version (ESV)

Much is said of these ministering spirits sent out to serve for the sake of those who are to inherit salvation. But what does this verse mean?

John Calvin, well regarded in some circles and not so well in others, said:

Beware of despising one of these little ones – As pride is the mother of disdain, and as contempt hardens men in giving offense, our Lord, for the purpose of applying an appropriate remedy for curing this disease, forbids his disciples to despise the little ones.

And certainly, as we have already hinted, no man who has a proper care for his brethren will ever allow himself, on light grounds, to give them offense. This conclusion of our Lord’s discourse has the same tendency as the commencement of it, to remind us that we ought to [compete] with each other who shall be most submissive and modest; for God embraces with wonderful love the little ones.

He goes on to explain the untenable position despisers put themselves in:

It would be strange indeed that a mortal man should despise, or treat as of no account, those whom God holds in such high esteem. He proves this love from the fact, that angels, who are ministers of their salvation, enjoy intimately the presence of God.

Yet I do not think that he intended merely to show what honor God confers on them by appointing angels to be their guardians, but likewise to threaten those who despise them; as if he had said, that it is no light matter to despise those who have angels for their companions and friends, to take vengeance in their behalf. We ought therefore to beware of despising their salvation, which even angels have been commissioned to advance.

And, in order to encourage the Church and thwart theological errors that are as common now as then, Calvin says:

The interpretation given to this passage by some commentators, as if God assigned to each believer his own angel, does not rest on solid grounds.

For the words of Christ do not mean that a single angel is continually occupied with this or the other person; and such an idea is inconsistent with the whole doctrine of Scripture, which declares that the angels encamp around (Psalm 34:7) the godly, and that not one angel only, but many, have been commissioned to guard every one of the faithful.

Away, then, with the fanciful notion of a good and evil angel, and let us rest satisfied with holding that the care of the whole Church is committed to angels, to assist each member as his necessities shall require.

Finally, he clarifies our relationship to the angels of God:

It will perhaps be asked, Do the angels occupy a station inferior to ours, because they have been appointed to be our ministers? I reply, though by nature they take rank above us, this does not prevent them from rendering service to God in dispensing the favor which he freely bestows upon us. For this reason, they are called our angels, because their labors are bestowed on us.

Let us always follow His command to: “Let the little children come to me and do not hinder them, for to such belongs the kingdom of heaven,” and beware, for: “Whoever causes one of these little ones who believe in me to sin, it would be better for him if a great millstone were hung around his neck and he were thrown into the sea.” And finally, to those who esteem the Church lightly, scripture declares that the angels encamp around (Psalm 34:7) the godly who are in Christ Jesus. 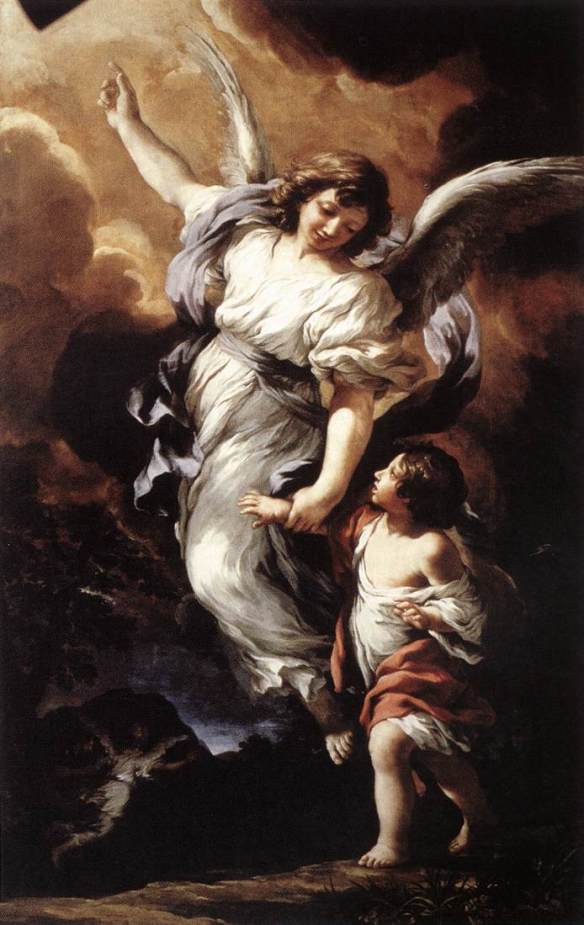